I really got inspired reading Håkan Fors’ article on “Are the Kanban practices in the right order”. Not only did he linked to a presentation Johan Nordin and I did at Lean Kanban Central Europe 2011 (which is always good), he also presented a way to visualize the maturity – or depth – of a Kanban implementation using a radar/spider/kaveat diagram.

The Depth of Kanban Graph

This came at a time when I was struggling to grasp the status of the 50+ teams that Johan and I had kick-started within Sandvik IT. We saw that some teams were more mature than others and were improving on their own, while other still struggled to get the basic in place. Of course that was to be expected, having so many different teams existing in so many different contexts. But how could we see and understand what each team needed to go further?

A simple and elegant solution to the problem is the “Depth of Kanban” radar/spider/kaveat diagram.  It is a graph with axes for each Kanban properties (visualize, limit WIP, manage flow, explicit policies, feedback loops, improve). It helps answering the following questions:

My Version of the Graph

In this blog entry I want to present my take on the “Depth of Kanban”. I have based my “Depth of Kanban” spider on Håkan’s graph as well as on David J. Anderson’s. I have adapted them to fit the context of Sandvik IT. I present here the latest version of the graph (which had had many revisions), but I believe it needs more work to reach elegance and simplicity. Do you have ideas to make it better? Let’s hear it! 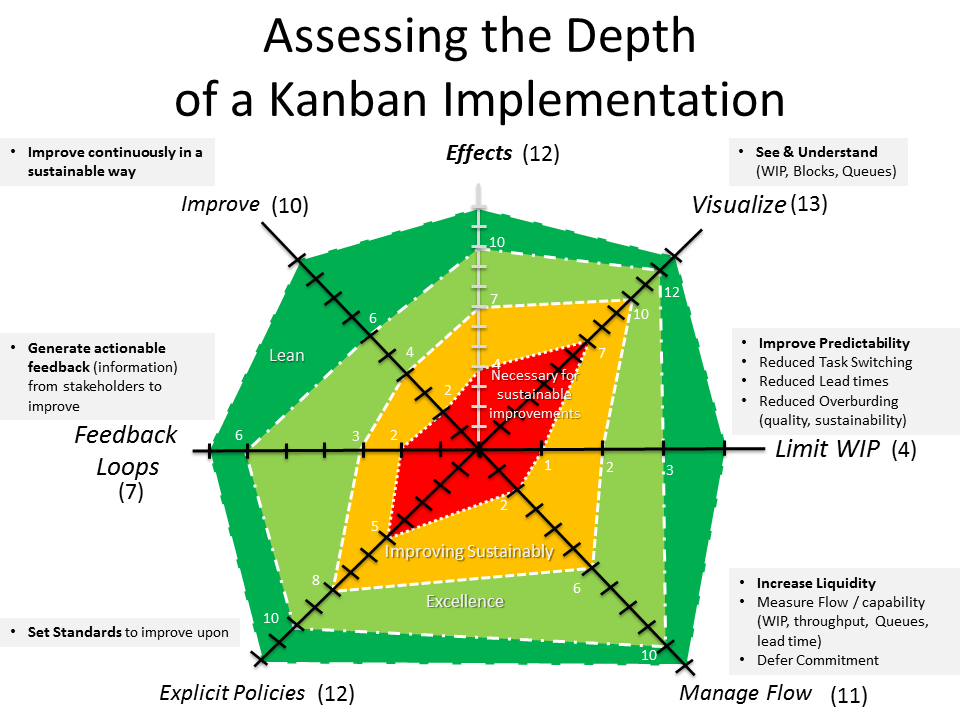 Here are the current questions to answer (yes/no) to understand the depth of the implementation (click for bigger): 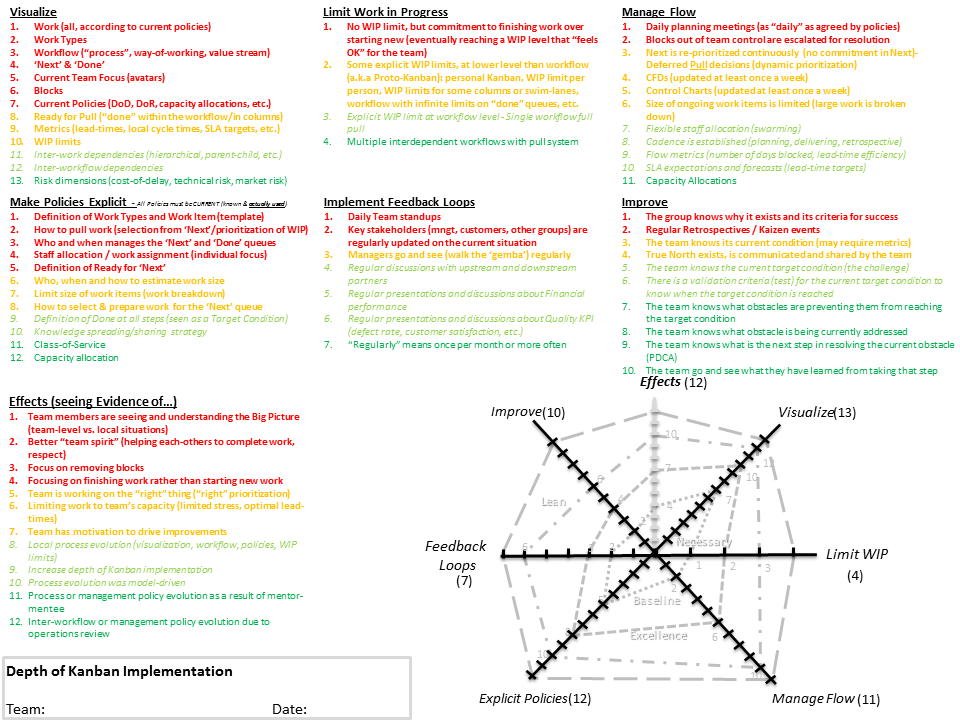 What are these different colors used for?
The primary goal for the use of Kanban at Sandvik IT is to engage the teams to improve, continuously and in a sustainable way. Now, in order to start improving a team must have some minimum capability to see and understand what is going on (clarity of execution) as well as knowing what to aim for (clarity of purpose). The red area on the graph is my attempt to define the minimal depth a team must reach in order to start improving on its own. While the team is “in the red” it cannot improve. That is a clear signal to the coach that action is need a.s.a.p. The other colors indicate other “levels” of depth, the greener the better, called “Improving Sustainably” (you want to team to be there a.s.a.p), “Excellence” and “Lean”. Note that the Kanban Kick-start (as it will be described in the coming field guide), will aim at getting the team directly in the “Improving Sustainably” area. Though, depending on the context, some teams might not manage maintain that condition and fall into the red.

So rather than a sequential implementation of Kanban (visualize, then limit WIP, etc. etc.), would you say it might be better to implement all the reds, then all the yellows, then all the greens? (Question by Philip Ledgerwood)
It depends what you are after when implementing a Kanban system. Teams that need to get in control of their situation need to focus on visualization, teams that have worked “ad hoc” for ages probably need to focus most on policies first, while others drowning in WIP must – of course – limit WIP. So, you current condition dictates how you will grow your Kanban system. What I am after is to give the team I coach the capability to improve/evolve on their own. That is where the “red” area comes from: a team needs to, at least, have these attributes to be able to understand their current condition and evolve from there. Then, the other colored areas are simply here as a reminder to the team: does it makes sense for us to go further with one principle when we neglected others? As the cost of going “deeper” is probably higher than the cost of addressing “surface” principles, and as the principles affect each-others, the RoI is probably better when addressing all “orange” first, then all “light green”, etc. So, yes, I am advocating a “spiral” model to implementing Kanban rather than a linear model.

Why do the axes have different scales?
Some principles are more demanding than others and it should be reflected on the graph.

Some questions you have there are sooo wrong!
Good that you’ve noticed that! Let’s fix it together (give me feedback).

Isn’t there too much details?
Probably! This is the very first version and I wanted to have “everything” in it. It is a coaching tool and the coach is needed to moderate the discussion and explain some of the concepts. So, currently this tool is not made for the teams to evaluate themselves. I will continue to use the tool and improve it (simplify it). Future versions will be posted on this blog.

Are these Toyota Kata’s 5 questions I see there?
Yes! I have renamed David’s Improve category to Effects (seeing evidenced of…) and used Improve for the improvement kata. I felt that it better matched the approach we have had at Sandvik IT to Kanban as a tool for boot-strapping continuous improvements.

If I took the exact questions and used them against the most mature Kanban implementation I’ve been part of we’d be in red (mostly) and yellow, with the sole exception of WIP limits. Would that mean that the implementation was shallow? By no means. It’s just the model that is broken. (Comment by Pawel Brodzinski).
True! You will get confusing/useless results from this tool if you use it as an evaluation tool or a compliance tool, especially in other contexts than the one I design it for (enterprise).
But that is not the intent and it is not how I use it. I use it as a coaching tool to trigger discussions with the team related to different aspects of Kanban. The coach moderates the discussions with the intent to understand the team’s current condition and what the team could focus on improving. So, depending on the team and its context, I have had situations where some questions were not relevant (e.g. work size is never an issue, no upstream or downstream partners, work items are never dependents) or plain wrong (e.g. we will never be able to do swarming). Other times, a team does not “do” certain practices as described but their purpose is anyway fulfilled (e.g. no daily meetings, instead plenty of interaction with other team members during the whole day). In practice this can result in me giving a “high score” regardless on what the actual template (the questions) tells. This means that the questions are simply guideline and the coach is *key* to understand the team and adapt to its context.
To summarize: It is not my intention to create an equivalent to the Scrum Nokia test. This tool is not an evaluation or compliance tool. It is a coaching tool to find areas a team could focus its improvement to get a balanced team.

Wow, cool! Now you can actually compare two teams to set the right salaries based on how much they score!
STOP! The goal here is not to compare teams between them. It really is only a coaching tool for each team to understand the next smartest improvement to do for having a well-functioning Kanban system. Considering the wide variety of team compositions, context, challenges and technologies I really think it is plain wrong (dangerous, irresponsible, insane?) to use the “depth of Kanban” to rank teams for management comparisons. The only valid usage is to compare a team with itself over a period of time. Did we get better? If no, why? If yes, why?

I am confused here: there are both “Improve” and “Effects” axis on the graph, what’s the difference?

To conclude, I find the “Depth of Kanban” graph to be a really useful coaching tool. It has helped me to re-ignite the improvement lust for teams that had reached a plateau. It also has helped me to present Kanban in a different/provocative way to experienced teams (and get some “Aha!” reactions). Finally, it is a good tool for me to understand the maturity of each team and what to focus my coaching on.

As I said, I am very interested in getting feedback on that one. So, don’t hesitate!

Here are the slides:

9 responses on “Depth of Kanban – A Good Coaching Tool”