When introducing agile thinking I usually show the Norstrom Inovation Lab video as best agile example. Though, to make some of the points come across I also show a typical example of a failed traditional project. I have long searched for a short video illustrating a failed project and accidentally found this gem when watching the whole Star Wars with my 7 years old in the right order. It is the opening sequence of “The  Return of the Jedi” and it is packed with management 1.0 goodness.

Unfortunately, for copyright reasons I cannot upload the video clip for your viewing. Grab a “Return of the Jedi” DVD (you surely have it somewhere) and look at the opening scene.

Darth Vader arrives on the construction site of second death star. He is greeted by an obviously nervous program manager:

Program manager: “Lord Vader, this is an unexpected pleasure! We are honored by your presence.”
Vader: “You may dispense with the pleasantries commander. I am here to put you back on schedule!”
PM: “I assure you Lord Vader, my men are working as fast as they can.”
Vader: “Perhaps I can find new ways to motivate them.”
PM: “I tell you, this station will be operational as planned.”
Vader: “The emperor does not share your optimistic appraisal of the situation.”
PM: “But he asks the impossible! I need more men.”
Vader: “Then perhaps you can tell him when he arrives.”
PM: “The emperor is coming here?”
Vader: “That is correct, commander… And he is most displeased with your apparent lack of progress.”
PM: “We shall double our efforts!”
Vader: “I hope so commander, for your sake. The emperor is not as forgiving as I am.” 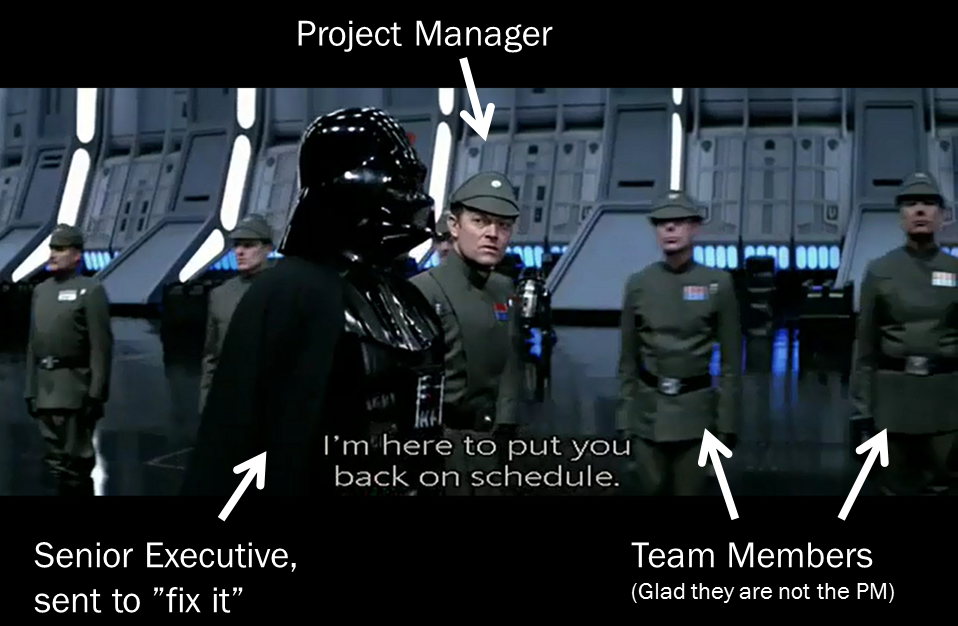 The program manager is at first trying to defend his position but quickly gives up when it becomes apparent that his program will get undivided top (dark-force) management attention.What we are seeing is a type of management that I would call management by fear. As the story goes, it will be apparent that this is not the best way to manage a project if you want to succeed.

Looking at it, we can feel how huge this program really is. It is a massive piece of hardware, looking hugely complex. We see a lot of manpower with heavy security, protocols and processes. We can only glimpse at the nightmarish complexity of the software systems needed to run the whole thing.
The investment cost must be staggering. Actually, thanks to the White House, we have an estimate of the cost of the building a death star: $850,000,000,000,000,000 (850 gazillions?)! If we also include the typical cost overrun of 43% observed by IT projects we end up with a cost of about $1,215,000,000,000,000,000. Well, this is a major investment. It has to be business critical!

Let us speculate for a moment on the premises on which the death star II program got started:

“We’ve done it before!”. Yes, though the first product was a total failure when launched. It ended quite abruptly and tragically, with many members of the original program disappearing with it (the chief architect/engineer/product-owner, architects, designers, programmers, engineering specialists, independent contractors, etc.). It must have been impossible for “The Empire” to re-form the original team. Therefore, the company had to rely on the documentation left over by the original team, which – again unfortunately – was quite incomplete as documentation was left as a part of the “hardening” activities which were ongoing when the first death star tragically disappeared. Fortunately, the original death star plans were saved by the pre-study project, which was dutifully documented (it is worth noted that the competition has had access to the same plans, though without the financial muscle needed to back-up its construction).

“Last minute change”. The program was underway, already somewhat delayed by the lack of knowledge (which the plans approved by top management took for granted), when marketing had a great idea!
It goes like this:

Smart Marketing guy: “We have this great idea! You’re going to looove it! Listen: we need to beat the competition once and for all…”
Program manager: “Yes, I am aware of that. That’s why make such an investment in this product.”
Marketing: “Yeah, yeah! Our idea is that we will soon have this great trade-show when we invite the competition to have a look at our unfinished product. OK? But then … our product is actually finished! And we blow them to pieces!”
PM: “What are you saying? We show an unfinished product that is… finished?”
Marketing: “Yeah! the thing is that it has to look unfinished, but then it’s fully operational! See the genius of it? This is awesome! The competition comes believing that we are not done, but then PANG we’re done!”.
PM: “Do I get this right? You want us to re-design the product to be functional even when not fully built, to re-plan all projects and sub-projects and tasks AND to deliver earlier?”
Marketing: “Yeah! Come-on! How hard can it be to deliver earlier if you do not build everything?”
PM: *long anxious sight*

So, the program was already delayed due to a lack of knowledge, but now it is even more delayed because marketing sees a business opportunity in releasing a modified version of the product earlier. The fact that it requires an extensive re-design doesn’t seem to bother management (or management is not even made aware of it). In this context, we understand that top management eventually has to act by sending a senior executive to take charge of the situation.

Let us speculate about what happens after Lord Vader’s “the emperor is not as forgiving as I am” little speech. We do not get to see it in the film, but it is quite easy to guess.
Welcome to “Get the job done!” death march:

The death star II was delivered on-time!
The program was a success!

Was it a business success?
No! It was a disaster! The product fared even worse than the first time. Speak about a tough market! The weight of the lost investment and the tragic disappearance of some key top managers with the product sent “The Empire” into disarray and eventually irrelevance.

The first death start became a total failure due to a design mistake (and a lot of luck): a “venting shaft” that connected directly to the highly explosive core. The second product – the result of management by fear – instead has a highway to the highly unstable core! This is clearly the result of stressed, exhausted architects task-switched into taking short-cuts to finish the darn thing in time. This also illustrate the inability of the chief product owners/engineers to control risk on the program.

“Why would we spend countless taxpayer dollars on a Death Star with a fundamental flaw that can be exploited by a one-man starship?”

What were they thinking?

They were not thinking! They didn’t have time.

They were not agile, nor lean.

How will you manage your next business critical project?

4 responses on “A Tale about a Failed Project: The Death Start II program”